Events in the Hall

Over the decades the hall has proved to be a much-loved venue, hosting a wide range of events, including musical performances of various kinds, fitness classes, literary readings (organised by the Mainstreet Trading Company’s wonderful bookshop), parties for both children and adults, badminton matches, and Christmas fairs, together with meetings of the Community Council, the Women’s Institute, toddler groups, and many local clubs. An early example: the programme of a Grand Evening Concert organised by the Cricket Club in 1923.

The Drama Society has enthusiastically put on a wide range of performances in the Hall; we draw on its rich archive below (with thanks to Christine Lawrie). All of that material has the prefix DC. For a sample range of events over four decades, see the programmes for The Miser (1964), The Brides of March (1972), Scarlet Ribbon (1982), and Miranda (1992). We have a lot of wonderful material relating to the society’s Golden Anniversary in 2000. In addition to the images below, see the following PDFs: DC 2000 set + Presentation Party; DC 2000 Golden Jubilee Summary; DC 2000 Ovens family & audience; and DC 2000 Program and Display Board. One image shows the late Muriel Ovens (a founder acting member of the club), along with her son Colin who was stage manager for many years and his son Ross who helped his dad when needed. Another shows some of the audience including (from left to right) in the front row (the late) George N. Harvie, who founded the club, Jean Johnston (a tireless contributor), an unknown lady, (the late) Peggy Collingbourne, wife of the other founder acting member John, and the late Mrs Harvie, wife of George the society’s founder. There’s also material relating to the 60th anniversary in 2010, when Roy McCormick, the author of that year’s play Culture Crazy, appeared at the event and joined in the celebration. The relevant PDFs are: DC 60th Anniversary; DC 1952 & 2010 programmes and DC 2000 set + presentation party.

St Boswells Live!, a music club run by the community for the community, has put on many packed-out performances. Their posters and pics are prefixed with St.BL here. The Hall is also a highly popular venue for weddings. The wedding video, made by the Borders’ wedding planning company Get Knotted, shows how the main hall affords a highly receptive space for creative design and layout. It also is used regularly as a polling station, and by the Blood Transfusion Service. In sum, this building is at the very centre of the village’s life. Having constantly and consistently served the community (since 1896!), we strive to keep the hiring costs of the Hall’s three meeting areas affordable in relation to the different budgets which users have at their disposal. If you are interested in hiring the Hall, please make a booking.

Weddings at the hall 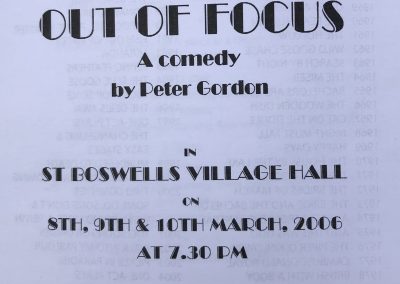