As with all fast-moving projects, the report is out of date as soon as it is written, and it’s especially so in this case; but at least it’s more up to date than the last one. Lots of different areas being created, rebuilt, installed and finished, so it’s probably best just pick a few highlights so you get a good idea what’s going on in YOUR Village Hall. 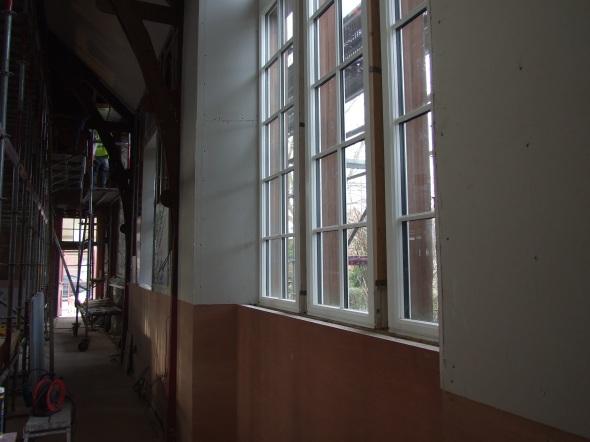 We start in the Main Hall, where the stripped walls have not only got new windows, but also been replastered and boarded on one side, with the far end and other side coming on apace. Considering this was a last-minute addition to the project the contractors have done an amazing job.

Up on the roof space, the ceilings are completely insulated and plastered and the suspended ceiling is nearly finished. The scaffold is being cleared ready to come down very soon.

In the Lesser Hall the heating units are back on the walls and plumbed in, and thanks to the new insulation will be running an awful lot less than they used to – so you can look forward to much quieter meetings! The painting is well underway. 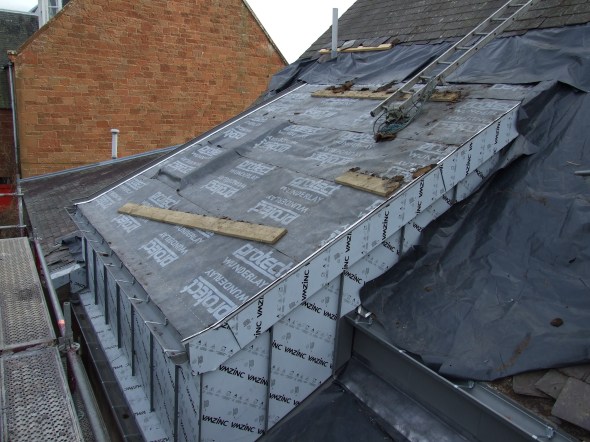 Above the new stairway to the Upper Hall, the dormer has had the metalwork completed and the roof is weather-proof. Slates are being laid to match the rest of the roof. This was a major piece of engineering and has made the new toilets possible, as well as a spanking new Upper Hall (to be revealed soon).

Finally for this report, the painting of the exterior woodwork is coming on a treat, and should last for many years. Lots of decisions have been made in the background while all this is going on, and over the next few weeks you’ll be seeing other colours emerge inside the hall. Looking forward to sharing it with everyone.