It’s been a while since we gave you a detailed update of the work going on in your Village Hall, but anyone who has been walking past in recent days cannot fail to have noticed that the Great Wall of OSB has gone, to be replaced by a spanking new, and rather modern-looking lobby door, all glass and dipped white frames. For those who are mourning the loss of the red / maroon / scarlet doors, they will be painted at the end of the project as part of the planning conditions.

The new Lobby Door, soon to be revealed in its unscaffolded glory

All sorts of things have been going on inside the hall and on the roof. The roof insulation is all but finished; the walls have been stripped in the Main Hall, a major job, soon to be prepared for re-plastering; all internal walls and ceilings in the back area have been plastered, ready for painting; and all the first fix electrics have been installed, bar the stage area, which will be done once the scaffolding is removed in the Main Hall. On the roof, all the new vents have been installed, so you’ll be seeing the disappearance of the external scaffold, once a few minor roof repairs have been carried out, and the Bell Tower checked for safety.

Almost complete on the roof, just the Bell Tower to be checked

One very important milestone has been achieved, which has taken place at remarkable speed, considering the scale of the job. As you know, the old stairs to the Upper Hall were removed to allow for the new toilets. At the other side of the building, a large hole was made in the floor of the Upper Hall, and an extension built to contain a new stairway, which required the roofline to be changed, and a new Velux window installed. The outcome is that there is now a new, secure way to the Upper Hall, which will be self-contained, including a toilet and kitchenette! More photos to follow, but for now here’s that new entrance, and stairs in lovely – albeit temporary – red. 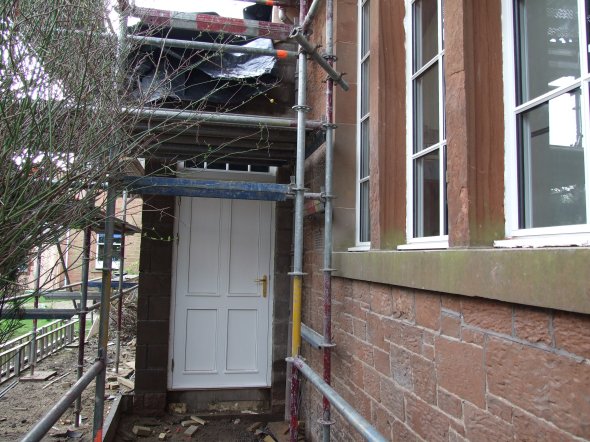 New side door leads to…

…the first flight of stairs, wide enough for a stairlift if needed… 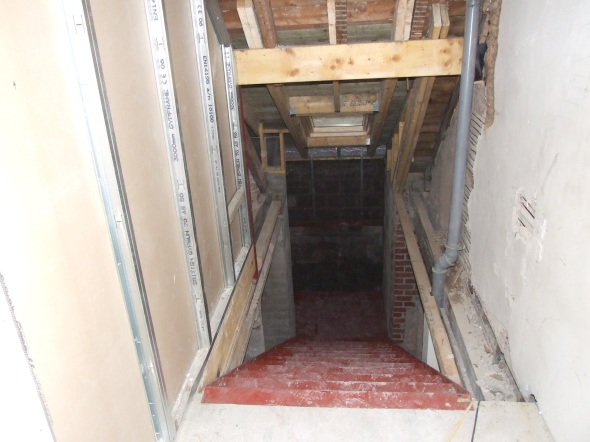 …which goes all the way to the top.